Seemingly hewn out of granite near the mouth of the River Douro, Portugal’s second city, known locally as Porto, dazzles with a rich collection of cultural attractions.

Porto’s historical heart is the Ribeira. This waterfront bairro positively insists you lose yourself among the maze of narrow streets and seek out some of the city’s most cherished architectural treasures. In fact, so rare and precious are the buildings that make up this venerable neighborhood that UNESCO declared it a World Heritage Site.

Much of old Porto can be described with a pronounced 18th-century accent. Extravagant Baroque churches and stately neoclassical buildings punctuate the skyline, their most valuable contents displayed in world-class museums set in picturesque squares.

Meanwhile, the city’s contemporary character is evident in its thriving modern arts scene and an alarmingly futuristic music venue. Crossing the sweeping bridge to Vila Nova de Gaia is a sightseeing highlight, as is a guided tour around one of the port lodges. A cruise along the Douro should be considered, and for a truly memorable city panorama take a ride on the cable car that glides from one end of the quayside to the other.

Discover even more places to visit with our list of the top attractions in Porto.

The soaring Clérigos Tower punctuates Porto’s skyline like a monumental needle. This is the city’s most visible landmark, a 75-meter-tall, 18th-century granite-hewn rocket, and visiting this historic structure should be high up on the “things to do” list.

You’ll need a stout pair of legs to climb the 240 steps to the top of the tower, but the effort will be rewarded with a breathtaking panorama of the river, the coastline, and the distant Douro valley – a bird’s-eye-view of Portugal’s second largest city, and an inspiring way for first-time sightseers to get their bearings.

Commissioned by the Brotherhood of the Clergy (clérigos) and designed by the Italian-born Nicolau Nasoni, the Baroque tower complements the adjoining Igreja dos Clérigos, which is also Nasoni’s handiwork. Built between 1732 and 1750, the church itself is a wonderful example of the architect’s affinity with the Baroque and features an elliptic floorplan, one of the first churches in Portugal built in such a way.

But the tower remains the highlight and, day or night, its tapered profile stands as a historic beacon visible from most parts of the city.

Dating from the mid-19th century, Porto’s former stock exchange contains a wealth of historic interest. Built on the site of a Franciscan monastery, its sumptuous interior is divided into several rooms and salons, each one singular in its appeal and worthy of close scrutiny.

Pretend you’re a wealthy merchant visiting on business as you wander through the Portrait Room with its gallery of uniformed monarchs, and then cast your eyes skywards after entering the Golden Room to admire its gilded stucco ceiling. You’ll be ready for your meeting with the boss in the lavishly furnished Chairman’s Room before joining fellow merchants in the richly decorated Court Hearing Room to witness mercantile law acted out in due process.

You may want to pop into the adjacent Juror’s Room before gathering in the magnificent Hall of Nations to mingle with the great and the good. But you’ll want to leave the best for last by sneaking off to the astonishing Arabian Room, inspired by Granada’s Alhambra, and the one place that really sells a tour of the Bolsa.

Incidentally, the building is the headquarters of the Porto Chamber of Commerce, and its members still gather in the classical General Assembly Room. 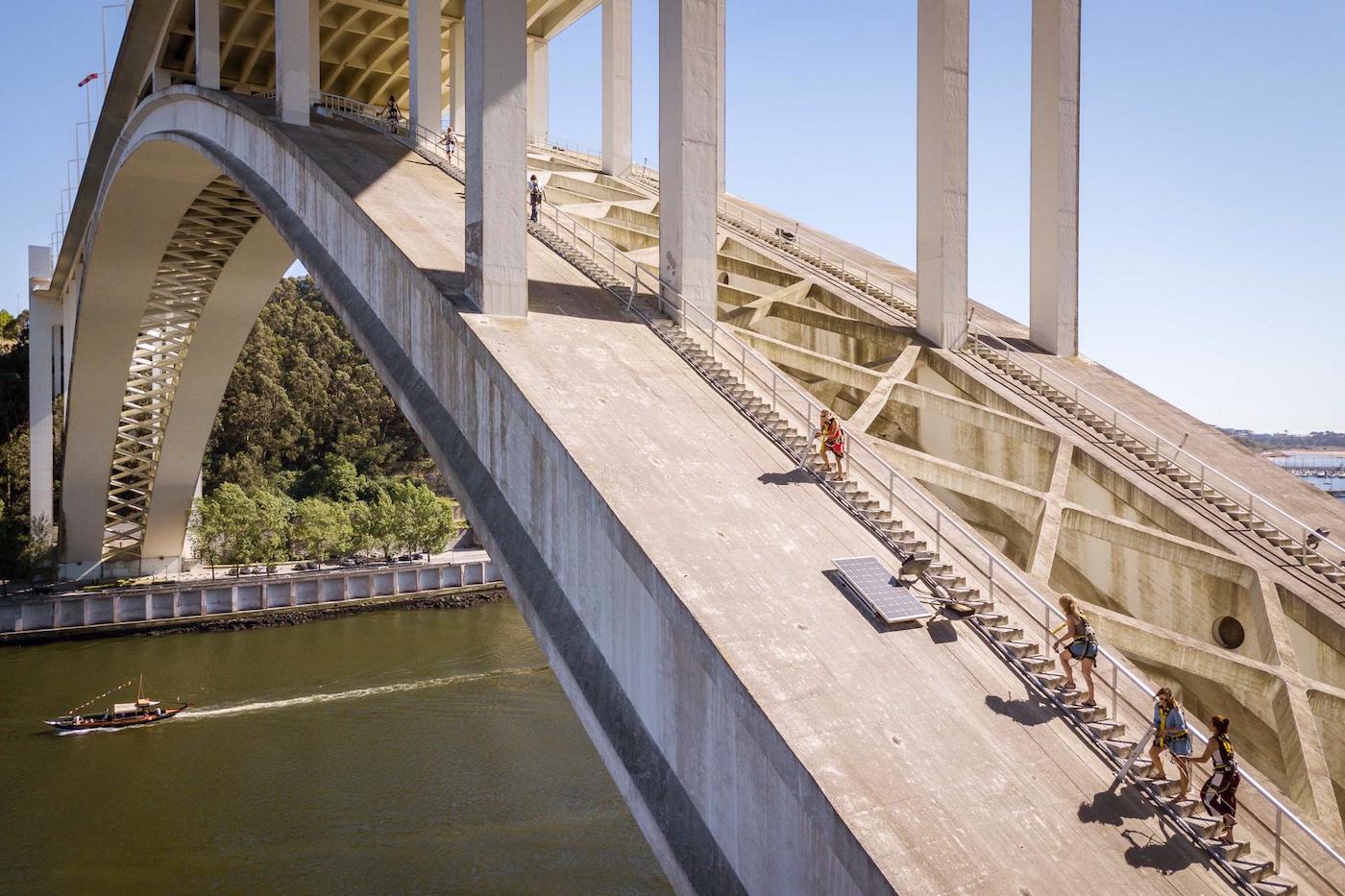 One of the more unusual things to do in Porto – and certainly a radical departure from the traditional sightseeing options – is the chance to climb the arches of the Arrábida Bridge, set downstream away from the more familiar Ponte Dom Luís 1.

The Porto Bridge Climb conducts guided tours of this iconic structure with participants attired in harness and secure lifeline in order to scale the lofty heights safely and comfortably. Following a narrow pedestrian staircase and connected by cable to a parallel handrail, visitors slowly scale the yawning arches to reach the top of the span, 65 meters above the River Douro. The panoramic views of the outlying city and the mouth of the river are truly memorable.

Descending the 262 steps reveals the size and elegance of this 20th-century engineering marvel, inaugurated in 1963 and currently the only bridge span in Europe that can be accessed this way.

Visitors are shrouded by gold as they enter the beautiful church of St. Francis. Its 18th-century Baroque interior is encrusted with a gilded veneer so dazzling and exuberant that most agree this is one of the best examples of worked gold anywhere in the country. Indeed, this is a priceless sightseeing experience.

Gilt carving embellishes the high altar, columns, and pillars, with barely a single patch of stone left visible. Look out for smiling cherubs and dour-faced monks as you edge towards the north wall and São Francisco’s Tree of Jesse, a family tree in gilded and painted wood depicting Christ’s genealogy.

An extraordinary and beguiling artifact carved between 1718 and 1721, the tree boasts fine detail seen in the expressions of Jesus, Mary, and Joseph, and other figures, including King David, Solomon, and Jesse himself, which leaves onlookers speechless.

A tour of the ancient catacombs underneath the church helps bring visitors back down to earth, but there are more treasures from the church’s monastery to behold in the museum afterwards. 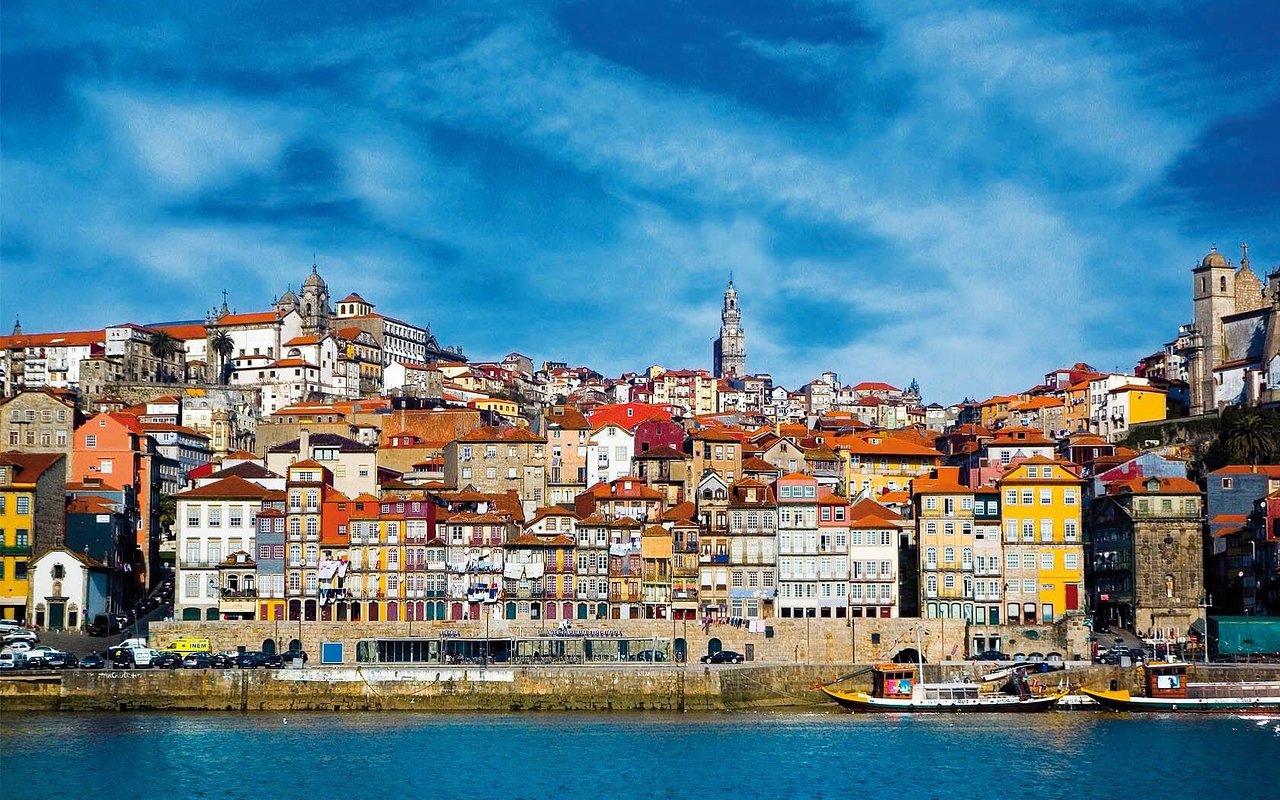 Porto’s riverside quarter is an alluring labyrinth of narrow, winding streets; zigzagging alleyways; and low-slung, sun-starved arcades. Facing the River Douro, though, are terraces of lofty townhouses painted in bright mustard, tangerine, and tawny hues – the Ribeira is an adventure in color and flavor.

A plethora of restaurants and cafés set under the arches along the quayside makes this the most popular area in the city for relaxing and socializing. Praça da Ribeira, the riverfront square, is a popular and lively meeting point and buzzes with a young, friendly vibe.

This is also a busy commercial district, where grocers rub shoulders with butchers and fishmongers. Tiny, dilapidated shoemaker’s studios echo to the industrious tapping of cobblers’ hammers, and the rustic aroma of freshly baked bread collides with the Douro’s salty, briny odor. Above it all, locals share gossip from balconies or open windows, shouting inexorably across lines of washing snapping in the breeze.

The Ribeira is also about history, and exploring this fascinating neighborhood is to discover medieval relics built over Roman foundations. UNESCO loves the place, and long ago declared it a World Heritage Site.

The grandiose Dom Luís I bridge is one of the most iconic structures in Portugal. Spanning the mighty River Douro to link Porto with Vila Nova de Gaia on the south bank, the bridge’s majestic sweep and two-tier aspect is a binding component in the city’s proud, social fabric.

The heavily riveted charcoal-grey ironwork has Gustave Eiffel written all over it, and indeed it was an assistant of the great French engineer who built the bridge in 1886. Commuters use the bridge on a daily basis – a road, Avenida da República, runs across the lower deck while the upper span accommodates a metro railway line.

Pedestrians can walk across using the narrow pavements set either side of the road, or be really brave and traverse the structure using the 60-meter-high top-tier footpath.

An outstanding view of the bridge can be had from the terrace of the Mosteiro da Serra do Pilar, on the south bank. From here, the entire city forms a fabulous backdrop, and the panorama is particularly dramatic at dusk. Don’t forget your tripod!